Save $147 Per Person On Outlander Experience Self-Drive

Save $147 Per Person On Outlander Experience Self-Drive with Goway

(based on twin/double, subject to availability and current exchange rates) 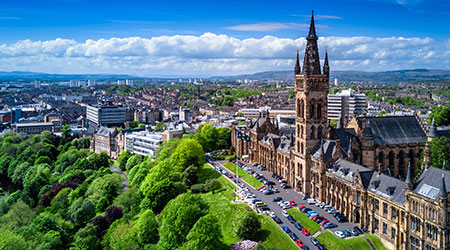 Photo: Explore and discover Glasgow at your pace


MODERATE | SELF-DRIVE: Diana Galbaldon's iconic 'Outlander' series, now the subject of a TV series, features a number of fantastic landmarks in Scotland. On this 8-day self-drive adventure, travel at your own pace to discover the real places that inspired Galbaldon while following in the footsteps of Claire and Jamie, and through the heart of Scotland. 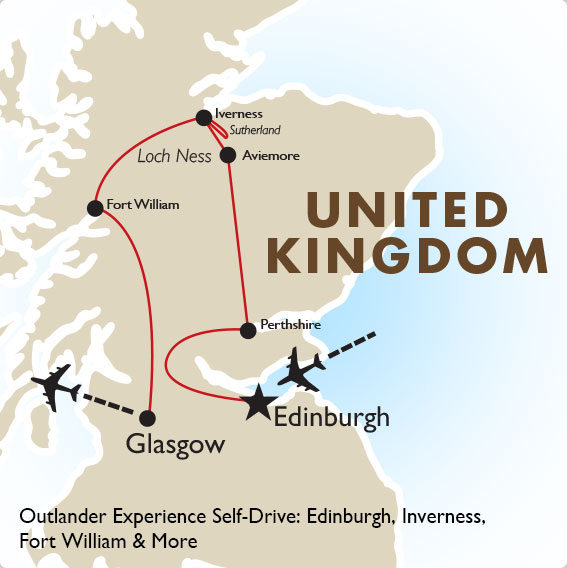 Upon arrival to Scotland, pick up your rental vehicle at the airport, then set off for the capital of Scotland, Edinburgh. One of Europe's must-see destinations, Edinburgh is a joy to explore; the downtown core is compact and lined with great shops, cafes and bars. After checking in at your hotel for your first overnight, consider heading out to wander the Royal Mile, or perhaps hop in your car and visit Arthur's Seat.

This morning, spend some time exploring Edinburgh, where Claire and Jamie reunited after 20-years. Scotland's historic capital is one of the most beautiful cities in the world. Testimony to this is the coveted award of World Heritage Site Status recently being awarded to the city's medieval "Old Town", and Georgian "New Town". Regardless of the time of year you visit Edinburgh it is a truly memorable experience with its many museums, art galleries, theatres, and cosmopolitan shops. Using your included Explorer Pass, visit Edinburgh Castle with its dramatic views across the city, and be sure to enter the exhibition housed in the castle, "Honours of the Kingdom", which consists of the Scottish Crown Jewels, and the Stone of Destiny. Return to your hotel in the evening for a final night in Edinburgh.

Your first stop of the day after a hearty breakfast is the village of Falkland and its palace. Falkland village is so beautifully preserved that it's being used as the backdrop of 1940s Inverness in the Outlander series. There are likely to be several views of the palace from the town and your entrance here is included in your pass. Falkland Palace, built by the King James V in 1539, became a favourite retreat of the Stuart Dynasty including Mary Queen of Scots. The gardens contain the original Royal Tennis Court, and is the oldest in Britain. In the afternoon you will continue to Newtonmore where you can visit the Highland Folk Museum and delve into 18th century Scotland with a living insight into the life of Highland people as portrayed in Outlander. Finally, check into your hotel in the Speyside area for a good night's rest.

After breakfast, depart towards Inverness and discover the mysterious Craigh na Dun, inspired by the stone circle of Clava Cairns, which swept Claire back in time. Experience the haunting atmosphere of Culloden where Claire and Jamie said their goodbyes and roam the streets of Inverness where Claire's adventure unfolds while on her honeymoon. Tonight, you'll overnight in gorgeous Inverness area.

Today you will visit the romantic towns of Strathpeffer and Beauly, where clans Mackenzie and Fraser of the Highlands once lived. Strathpeffer is a charming Victorian spa village, famous for its healing waters and home to a 6th century carved stone known as the Eagle Stone. Continue towards Beauly where you can set foot in Beauly Priory where Claire met the seer, and according to the Outlander books, where the Lovat Frasers are buried. Return to Inverness for a relaxing evening at leisure.

Travelling south today, you will enjoy a visit to Urquhart Castle, one of the largest castles in Scotland. It fell into decay after 1689 and was blown up in 1692 to prevent it from being occupied by Jacobites. Most of the existing remains date from the 16th century and include a tower. Here you will also get fabulous views of the famous Loch Ness and have a chance to go down to its banks in the hope of seeing the 'Water Horse' which so entranced Claire Randall -- or 'Nessie' as she is better known here! Enjoy an enchanting journey along the Caledonian Canal and Great Glen as the newly-weds did after their wedding and admire dramatic scenery and impressive wildlife along the way. Tonight, you will overnight in the nearby Fort William area.

Travelling south again this morning, you will drive through the dramatic and historic glen (valley), scene of the 1692 massacre of part of the MacDonald clan by soldiers of King William. Its steep-sided mountains offer superb walking and climbing. Red deer, wildcat, golden eagle and rare arctic plants can be seen among the breath-taking peaks and spectacular waterfalls. You can visit the new eco-friendly Glencoe Visitor Centre which houses fascinating exhibitions about the area, its human and natural history and the people who live here. Onwards into the Trossachs, you will visit Doune Castle. Built for the Regent Albany, Doune Castle is a magnificent late 14th century courtyard castle. Its most striking feature is the 100ft high gatehouse which includes the splendid Lord's Hall with its musicians' gallery, a double fireplace and carved oak screen. It is also the atmospheric stand in for the fictional Castle Leoch in the Outlander series. Rounding out the day, carry on to Glasgow where you will spend your final night in Scotland.

After an incredible adventure, it is now time to leave Scotland. Return to the airport, drop-off your rental vehicle, and board your flight onwards.

Prices are "from" per person based on twin/double share accommodation and for travel in low season. Seasonal surcharges and blackout dates may apply. Limited seat/spaces and all pricing is subject to change and availability. Hotels listed are sample hotels only and are subject to change; hotels are confirmed no later than 3-weeks prior to departure. Vehicle rental upgrades available - please inquire. Rates for single or triple travellers are available on request - please inquire.

Constantly evolving to keep ahead in one of the world’s most dynamic industries, Goway offers the utmost professionalism, with a personal touch.

Enquire for the offer now!

FacebookTwitterEmail
* This offer is subject to availability and can be withdrawn or varied without notice.