Sail along the Danube, enjoy intimate performances by Jim Cuddy, and make memories to last a lifetime on this hosted river cruise with Avalon Waterways!

Journey along the Danube and see firsthand why this storied river has inspired generations of artists, poets and musicians. Indulge your passion for timeless architecture and art in three magnificent capitals: Budapest, Bratislava, and Vienna. Cruise through the wine region of the Wachau Valley and into Deggendorf. Be among the few guests to sail the Danube River with Jim Cuddy, Anne Lindsay, Devin Cuddy, and Sam Polley in October 2022. On this exclusive experience, you’ll hear live on-board performances by award-winning Canadian musicians, have the opportunity to explore Europe by bike on a tour with Jim Cuddy, and support PEI’s Stars for Life Foundation for Autism at an intimate fundraising dinner with these top Canadian musicians. You'll be well-taken care of on this tour hosted by Stewart Travel Group.

This cruise was originally scheduled for 2020-good things come to those who wait!! 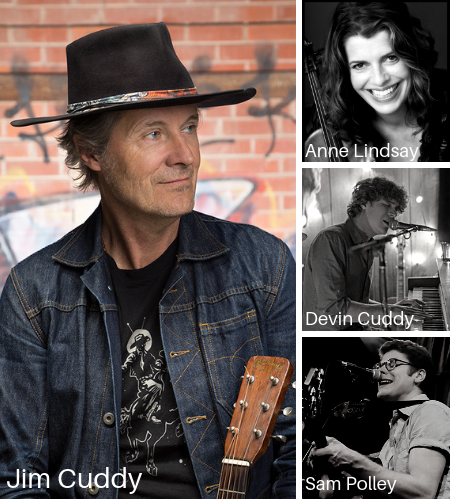 As one half of one of Blue Rodeo’s song-writing partnership , Jim Cuddy has one of the most recognizable voices in Canadian music thanks to omnipresent hits such as “Try ,” “5 Days In May ,” and “Bad Timing.” As a group , Blue Rodeo has sold over 5 million records world-wide , won countless JUNO Awards , been inducted in to the Canadian Music Hall of Fame , received a star on Canada’s Walk of Fame , and Jim (along with song-writing partner Greg Keelor) was invested as Officers of the Order of Canada.

In 1998 , in between Blue Rodeo projects , Jim released his first solo album All In Time and hit the road with the eponymous The Jim Cuddy Band , featuring Anne Lindsay (fiddle) , among others. Since that first release , Jim has recorded four more solo albums , including his latest , Countrywide Soul (2019) , a celebration of music and the musicians who join him on stage each night.

Countrywide Soul was recorded live on the top floor of Jim’s barn and kept as natural as possible to retain the woody sound of the barn board room and the energy that only comes from playing together live. To achieve his goal on this album , Jim re-worked a number of songs previously recorded for his solo career and with Blue Rodeo. To round out the record , he wrote two new songs and included a couple of favourite covers. Hear these and long-time Canadian favourites live on-board during our voyage.

A master of wealth and diverse styles , Anne is an award-winning fiddler , violinist , and vocalist. She is an exuberant fireplug of a player whose skills have graced many a stage around the world. She has played on hundreds of recordings and is a featured performer with The Jim Cuddy Band. Her discography includes three award winning records , as well as her latest album , Soloworks , a masterful blend of toe-tapping fiddle tunes and lyrical ballads.

Born the same week as Blue Rodeo began recording its 1987 debut album Outskirts , country rock has been the soundtrack to Devin Cuddy’s entire life. The most important lesson Devin learned from his father – one of Canada’s most beloved singer/songwriters , Jim Cuddy - was that the way a musician truly develops their craft is in front of audiences. Having carved his own path , Devin is now pursuing the large audiences he deserves as the lead performer in The Devin Cuddy Band. Experience Devin’s musical dexterity and unique lyrical approach throughout our sailing.

Being the youngest member of a musical family , Sam Polley grew up in the music industry , but took his own time to join the family business , forming Sam Polley and The Old Tomorrows in downtown Toronto in 2017. Drawing their sound from 50’s and 60’s rockabilly licks , old country twang , and Motown swing , blending genres to create an upbeat boogie with groovy hooks , the band’s newest album is sure to get everyone up and dancing.